As I was putting the finishing touches on my hospital bags last night I realized I haven’t posted all that much about my second pregnancy on social media. Yes, I’ve shared a few baby bump pictures here and there along with some of the big milestones like our gender reveal party, Kellen’s curiosity of my belly and of course my nesting which has been in full swing lately. But that’s about it, so why have I been quiet? Two words: pregnancy shaming.

Yes, you read that correctly I said pregnancy shaming. You might be in disbelief that there is such a thing but let me tell you it’s very much alive just like body shaming of all shapes and sizes is in our world today. It doesn’t matter if you’re overweight, underweight, have muscles or not, someone will always find something wrong with your body…even when you’re pregnant.

“Are you SURE your due date is correct?”
“Are you positive you’re NOT having twins?”
“I can’t believe you got so BIG so fast!”
“How much WEIGHT have you gained?”
“You’re not due for a few more months? Oh, you poor thing!”

Yes, those are all things that were said to me during my first pregnancy. So why am I bringing up the past? Because those words still ring in my ears and have my entire second pregnancy. Whether I wanted them to or not they have affected how I view my body when I’m doing one of the most miraculous things God created a woman to do, form life in her womb. I’ll never forget the things people said to me and the tears I shed, mainly out of disbelief that people actually had the nerve to say those things to anybody let alone a hormonal, pregnant woman!

Now I’ll admit my first pregnancy wasn’t the healthiest and I managed to gain 50 pounds between stopping working out due to fear of harming the baby, eating way too much junk and working numerous 12 hour nursing shifts in a row. Thankfully I was able to lose it all within 7 months when I adopted an even healthier lifestyle then prior to pregnancy but that’s a different story for a different day. Fast forward to finding out I was pregnant for the second time and one of the first things on my mind was I just can’t gain 50 pounds again. Not because I felt “big” during my first pregnancy or was scared of having to lose the weight but because I didn’t want to deal with the body shaming again. Especially now that sharing my health and fitness journey is something I do daily, out in the open for everyone to see. And then it happened…

The absolute first person I told at work that I was expecting again and this is what she had to say, “gosh I hope you don’t get so BIG and MISERABLE again!” Excuse me? I about fell off my chair that at only 8 weeks pregnant the shaming had already begun before I gained a single pound. I’ll be honest I had to simply walk away from the conversation out of fear I would say something I regretted and then it hit me. It doesn’t matter if I gain 5 or 500 pounds this pregnancy, people are still going to pick me apart because sadly that’s what negative, insecure people do and it’s not about me, it’s about them. In that moment I decided no matter what happened this pregnancy my focus would not be on the scale or what other’s had to say about my changing body but on health, for both me and my growing baby!

Focusing on health this pregnancy has made it an absolute breeze and honestly I’m still in shock that I could go into labor at anytime because for the most part I feel pretty good but alas the shaming continues. “You still have another MONTH? Your BIGGER at 36 weeks than I was at 40.” And my personal favorite is when people just look at you with pity or disgust on their face. Thankfully, given my healthy outlook on pregnancy and the fact my faith has grown tenfold since my first pregnancy I can just smile and say, “I actually feel AMAZING all things considered and this little man can stay put until he’s ready!”

In closing, this post was not intended to be a rant or make you feel bad for me because of the hurtful things I’ve experienced. It was intended to simply remind you how deep words can hurt and impact others, whether they are pregnant or not. It honestly makes me cringe to think of how this negativity and shaming could cause serious harm to an expectant mother and her unborn child because I don’t know if you’re aware but eating disorders and depression are very real even in pregnancy. So please next time you see a pregnant woman no matter what your thinking, flash her a smile and tell her just how beautiful she is because it may be the first time in a long time that she’s heard it! 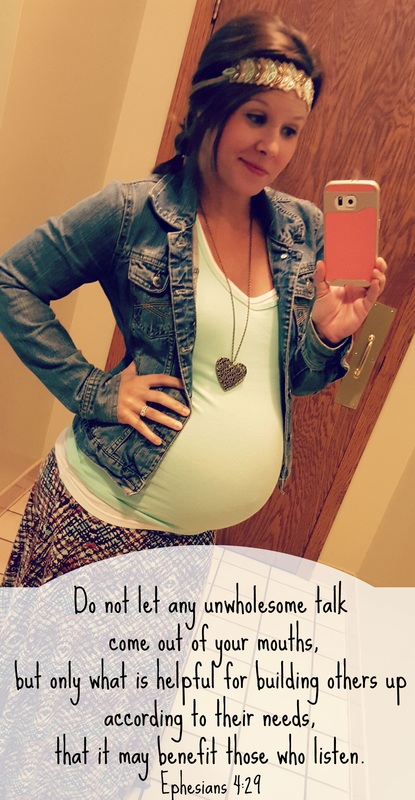